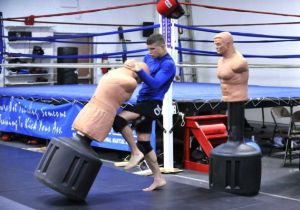 Several people have been asking me when they’ll be able to purchase their “Team Iaquinta” T- shirts. Within the next week or so I’ll be putting an order in but I wanted to open it up to you and hear some of your ideas first. As of right now we were thinking a very simple black T shirt with white letters that say “Team Iaquinta” on the front. This is where I’d love all of Iaquinta Nation’s input. Everyone’s suggestions will be seriously considered. Lets hear from you. What do you think the shirt should look like? Should there be a quote of some sort on the back? Should the shirt say “Ultimate Fighter” or “TUF” on it? Curious to hear everyone’s ideas and then well be able to represent “Team Iaquinta the right way.