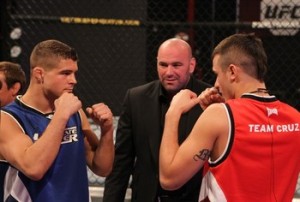 A lot of controversy right off the bat to start the show last night. Both teams had a lot to say about Cruz’s choice to let Faber pick who he wanted to fight Lawrence this week. A lot of trash talking ensued from Team Cruz’s guys commenting that no one stood up, and Team Faber’s guys didn’t want to fight. As I talked about HERE of course Faber’s guy’s want to fight but they can’t stand up it’s to early to do that. Al put it very simply ” No one is going to jump out of their seat to fight the number one guy, it’s just not smart.”  Faber admitted it was a good move by Cruz and went on to discuss how Cruz get’s on his nerves and he has the urge to punch him in the face.

The most trash talking came from Chris Tickle who seems like he’s going to be a real character on the show. Tickle who the guys on Team Faber have described as obnoxious, continued to call out some of Faber’s guys including Al back at the house. He said  none of them wanted to “bang” because no one stood up, and called out Faber for not choosing anyone. Later in the show we see Tickle getting into practice late, making excuses, leaving practice to use the bathroom. Cruz who is frustrated with this talks about how he “needs to encourage him and just deal with him, and get him ready to fight.” Tickle who also started a verbal argument with Cofer during the episode will be very interesting to watch this season.

Leading up to the fight we learn a little bit about this weeks fighters Justin Lawrence and Cristiano Marcello. Lawrence who’s family owns their own gym has been in competition for most of his young life. Lawrence has been wrestling since he was in 3rd grade and fighting since he was six years old. He has 150 amateur fights and is the youngest guy (21) in the house. He feels like he’s “born to fight” and wants to “shock the world.” Cruz talked about how this fight could be a semi final or final fight. He discussed picking this match up to challenge his first team pick Justin Lawrence.

Cristiano Marcello is a jiu-jitsu expert and oposite of Lawrence is the oldest in the house (34). Marcello is a Gracie black belt and has coached guys like Wanderlei Silva and Shogun Rua. Cristiano talked about the edge he had over everyone else in the house being that he wasn’t just fighting for money. He’s fighting for his wife and children. Faber stressed to Marcello that he needed to push the action in the fight and do some dirty boxing. Faber went on to remind him to be sure to keep his chin down on account of Lawrence’s heavy hands. Most importantly he warned him to be aware of the big left hook.

Faber was spot on with his scouting report, because a big left hook by Lawrence ended the fight in the second round. The fight gave us a look at Lawrence’s good hands, as well as some great movement on his feet. Where Lawrence looked comfortable and played his game, Marcello didn’t look as aggressive as many expected. The two stood up the entire fight as Lawrence smartly wanted no part of Marcello’s ground game. Although Marcello looked a bit more aggressive in the second round, he seemed to tire near the end leaving Lawrence in complete control, and putting him in position for the big knock out.

With the Lawrence victory Cruz kept control to pick the next fight setting up a big match up for next week. He chose Myles Jury from his team to fight Al Iaquinta. Hold on to your seats Iaquinta Nation it’s going to be an exciting week with a big LIVE fight next Friday. Be sure to check back here all week for constant updates leading up to the fight!