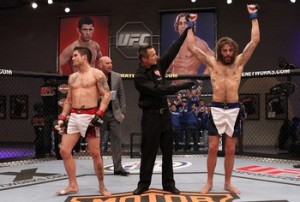 This weeks episode got right back into all the action from the Iaquinta Jury fight. Dana White offered some of his thoughts on last weeks battle. He touched on Jury’s ability to “land some good knees, was hitting head kicks at will.” He discussed Al hitting some big shots of his own, constantly moving forward, pushing the pace. The action made for an exciting first round that White thought although it was very close, Jury edged out. He went on to discuss that he was impressed by both fighters in the second round including the big knee by Jury, as well as the even bigger right hand by Al. He felt Al without question won the second. White spoke about the importance of the sudden victory third round. “The 3rd round is Holy Shit, I just got another opportunity to show I want to be here” White explained. Dominick Cruz spoke about Jury in the third round and how he “had never had a grinder fight like this.” He went on to explain how in a fight like that forward pressure is everything. If you don’t throw first you can wind up loosing. Both White and Cruz felt Al controlled and pushed the entire pace of the third round to secure a victory.

There was two very interesting exchanges between Cruz and Sam Sicilia. Sam and Team Faber’s Mike Chiesa are not only training partners outside of the show, but best friends as well. Cruz spoke to Sam privately trying to get a scouting report on Chiesa to assist their teammate Jeremy Larsen. Cruz tried to grill Sam on how often the two trained together, what he does, and what submissions he likes to use. After recognizing Sam’s discomfort to share any information Cruz explained how he was just trying to prepare him for the future. There could be a point where he even has to fight Chiesa. Sam had a few thoughts of his own. He wouldn’t tell Larsen what Mike does and vice versa. Sam said he “wouldn’t compromise the kind of person he was.” When this is all said and done he still has to go home with his best friend.

A lot more questions around Chris Tickle this week. He’s been having problems with his toe, and there was even some question of him having gout. Cruz frustrated over the constant issues around Tickle confronted him asking him if he wanted to leave the show. Tickle was very upset over the question and reiterated that he wanted to be there and work past any injuries he may have. Later in the show Tickle was cleared by the doctor. We saw more frustration from Cruz when Tickle said he had to leave practice because his stomach hurt. Cruz made him put his gloves back on, telling him he was just tired and had to work through the pain. Well see a lot more of Tickle in this upcoming episode as he gets ready for his fight against Joe Proctor.

Jeremy Larsen against Mike Chiesa was an interesting match up. Larsen was just a street fighter heading down a bad path. Mixed Martial Arts really saved him and kept him in check. Larsen’s strength is his boxing. On the other side Chiesa is a good wrestler who offers some dangerous submissions. Although Larsen showed some good take down defense, Mike was relentless with his take down attack in round one. Halfway through the round Chiesa slammed Larsen and continued to attack from the top position. Late in the round Chiesa hit Larsen with an illegal knee, costing him a point which could have been huge in a short two round fight.

Some back and fourth in the second round with Larsen landing a few good shots. Chiesa continues to look for the takedown. When he does he isn’t able to do much on the ground with it. Once both fighters are back up there’s another good exchange with Larsen landing some more good shots to keep the fight close. Mike is able to take Larsen down again and secure his back. He attempts to choke Larsen to end the round. The fight was close but Chiesa did enough to secure a unanimous decision win. Now with Team Faber and Team Cruz tied with two wins a piece, Faber gets control again and selects Joe Proctor to fight Chris Tickle next week. With all eyes on Tickle who’s generally full of excuses it’ll be interesting to see how he acts in the week leading up to his fight. Check back all week for updates and make sure to contact me about Iaquinta Nation T-Shirts!