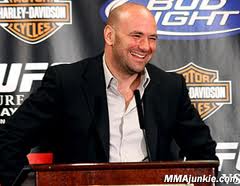 If you recall from Al’s fight last week there was an extended break leading into the third sudden death round. Instead of the normal one minute break, there was a break of at least four or five minutes, almost a full round. For Iaquinta the later rounds is where he’s at his toughest. The strongest part of his game is out working his opponent in the later rounds. The extended break gave Myles Jury a lot of extra time to recover. The problem has to be fixed and the format needs to stay consistent with the standard UFC rules. Dana White was upset about the long delay in between rounds and spoke about it HERE via MMAjunkie.com White discusses the dangers of the long break and what he feels needs to be done to fix it. White has a strong personality and if he thinks something needs to be corrected there’s no doubt it won’t be an issue in the future.