Vic Torres Jr. talks Al and a Great Cause 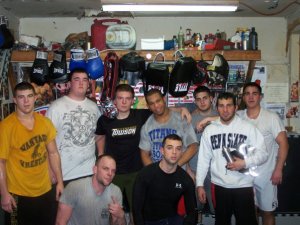 This weeks interview is with Vic Torres Jr. Al and I had the pleasure of having Vic as our captain when we were freshman wrestling at Wantagh. Vic was a great teammate and leader who we all learned a lot from. He is an incredible husband and father, as well as an outstanding trainer and fighter. In 2010 Vic was diagnosed with Multiple Sclerosis. He’s going to be doing a walk for MS and “Team Torres” this Sunday. I thought this would be a perfect time for Vic to talk about his experience with MS, tell us about the walk he’s participating in, and get his input on Al as well. I really appreciate Vic doing this interview with me and I urge everyone to donate in any way you can to the cause.

If you can tell us a little bit about your personal experience with Multiple Sclerosis and the battle of working through it.

In 2010 I was diagnosed with MS. I was married less than a year, a father, and had just started my amateur fighting career. I had no idea what was happening to me. I didn’t even know what MS was when they told me. I lost all my balance, and had painful pins and needles sensation throughout my legs and feet. On top of that I experienced extreme fatigue and became very weak especially in my legs. Even though I was scared out of my mind, I knew this wasn’t going to stop me. With the support of my family and close friends I was able to get back to feeling as normal as I could and get back into the ring as well. Now I’m used to it. I just ignore it and get by the best I can. Eating healthy and staying physically fit help a tremendous amount.

You’re strength of working through MS is very inspiring. What advise would you give to anyone having a difficult time dealing with similar restrictions who may be having a tough time working hard and stay focused like yourself.

I would tell them to beat the odds. Laugh in the face of this terrible disease and prove the doubters wrong. You have to convince yourself that you are going to live a happy life, no matter what obstacles are in the way. Stay positive, love life, and never stop fighting.

How important has the support of your friends and family been?

Support from my family has been over the top. My lovely wife and my two beautiful daughters are always keeping me occupied with planning events, or going to dance competitions for my oldest daughter Mackenzie. It keeps my mind relaxed and happy, making it easy to get through the tougher days. My mother and father are my biggest fans. My mom is always keeping track of all my medicine and doctor’s appointments. My father will do anything for me, and is a big supporter of me fighting. My brothers are my best friends, they always go out of their way for me. Rob White and his fiance Liz, Linda, Mike, Erin, Tom “Blue” Carlo and his family, “The Jungle” guys and  the guys at Bellmore kickboxing are other people I can write pages on, even though I know I can’t right now. I would at least like to mention their names because they are the reasons why I enjoy my life as much as I do.

Tell everyone some information about the 2012 MS walk this Sunday May 6th.

This Sunday May 6th at 9:00 AM we’ll be at Jones Beach Field 5 raising money for MS in the National MS WALK. You don’t have to sign up for it, just come down and support. My team will be wearing TEAM TORRES shirts and anyone is welcome to walk with us. It’s a great day for a great cause, every dollar is appreciated. You can Donate for Team Torres HERE.

You first met Al when he was a freshman on the Wantagh Wrestling team. What were you’re first impressions of him? Can you talk about the toughness he showed as a young wrestler throughout that first season?

Al was always a good wrestler. I got to see him wrestle as far back as middle school because my brother’s Chris and Craig were on his team. He was much more aggressive than other wrestlers, always coming forward and pushing the pace. As a freshman Al never gave up even though he was wrestling guys older and more experienced. He gave them a run for their money every time. He’s always been thought of as a tough dude.

How did you see him progress as a wrestler throughout high school?

He went to that amazing wrestling camp J. Robinson intensive camp two year’s in a row. That’s when we all saw a big differences in his game. He showed relentless cardio, and the ability to break people down physically and mentally. He was a dominate wrestler his Junior and Senior year. It was really nice to watch his progression through his years at Wantagh.

You have a training facility that you call “The Jungle”. Tell us about that, and any experience you’ve had having Al come down and train there.

“The Jungle” is our garage that we switched into a training facility. My brother Chris and I give personal sessions there to people looking to lose weight and get in shape. We also have a bunch of friends come down and train with us. We have competed out of “The Jungle”, placing in NAGA’s, and winning kickboxing matches. Iaquinta also has a training facility in his garage so when Longo’s is closed for a holiday we plan a training session. It’s awesome seeing a guy that trained with us in “The Jungle” on TV on the Ultimate Fighter.

What’s it like training with Al weather it’s wrestling, kickboxing , or anything else?

To be honest, it’s not awesome. After it’s over I’m pretty proud of myself for getting through it. The kid is a straight up beast. He is way lighter than I am, but feels stronger than a guy my weight. He puts me in moves that just hurt and take my will away. His grappling is off the chain and his stand up is even more impressive. If I ever get a shot or a move on him, it doesn’t phase him. He easily counters or defends it properly. He is on a high level. It can be very humbling after a training session with Al.

Tell us about Al as training partner and as a person.

Al is very helpful when we train together. He is always down to show me moves that work for him, or to help me if I am doing something wrong. I’ve learned a lot training with him. He’s shown me what it really takes to be a successful professional. Iaquinta is a great dude. He’s got a great sense a humor but knows when to get down and work hard. The drive and focus he has is really impressive.

How important is Al’s work ethic in being successful in this sport?

Al’s work ethic has to be one of the main reasons why he’s on this level. He’s always running around Wantagh rain or shine, going to Cedar Creek park and running the hills, and that’s all before training. He’s constantly doing extra work in his garage with his boys Marcel and Jansen. Al doesn’t cut corners. At Ray Longo’s gym he’s working with world class trainers and sparring with elite fighters. He knew where he had to be, and he kept his eye on the prize. He deserves all the attention he’s getting now.

What do you think is the most important part of Al’s game?

Iaquinta’s hands and wrestling are phenomenal, and he has that “killer instinct” that some fighters don’t have. Yet that wouldn’t be important if he didn’t have the cardio to back it up with. He can fight for days. The second and third rounds are where he’s going to push the pace. Al isn’t going to seem tired and his opponent will be gasping for air. I would definitely say Al’s cardio is his most important part of his game.

We’ve talked about this previously but there was a lot of controversy around Al’s first fight against Jon Tuck. What are your thoughts on the fight and the “toe incident”.

Jon Tuck is an excellent fighter and an outstanding jiu-jitsu practitioner. That was a very difficult first fight for Al to draw. I thought Al did a great job defending the submission, tagging Tuck with punches and knocking him to the ground.

My thought on the “toe incident” is that anything can happen in a fight, that’s why MMA is so amazing. Its unfortunate for Tuck to break his toe, but he can still throw punches and kick with the other leg. When he fell on his back, it wasn’t like the toe was stopping him from attempting submissions. Tuck’s fans online were acting disrespectful and didn’t give Al the credit he deserved.

Is it strange seeing the small but tough 112 pound kid from your wrestling team on National TV every week?

Very strange would be the best way to describe it. It’s crazy seeing him go from the Wantagh high school gym to Las Vegas in the TUF house. I get really excited watching Al fight, but so nervous about what’s going to happen. It’s a lot of emotions all at once. I’m just happy for him, it’s awesome watching him make it to this level.

These guys are starting to get very bored in the house. How do you think you personally would be able to deal with being away from society for this long?

It would be hard after a couple of weeks. Not being able to talk to or see my wife and kids would be rough. No computer, cell phones, or TV would be difficult as well. I’m sure certain guys would start to annoy me after I found out who they really are. I would try to stay away from the alcohol, but if I had a few weeks until my next fight and was bored I might have a couple drinks. I wouldn’t want to get thrown off the show for doing something silly.

Who do you think is the best match up for Al in the quarter finals?

I’m really confident that Al can beat anyone in the house. If I had to pick his next opponent for the quarterfinal round I would chose James Vick or Chris Saunders. I think Al would have a big advantage over them. He would be a heavy favorite.

Same song and dance for the last question. Quarter finals are next, what are you’re predictions for Al from here out? Do you see him in the finals?

I absolutely see Al in the finals, probably against Justin Lawrence or Vincent Pichel. Iaquinta is a well rounded fighter and can take the fight anywhere he needs it to make sure he gets the win. If Al’s opponent is a good ground guy he will use his take down defense and throw the cross and hook all day. If the guy is solid on his feet Al’s college wrestling and grappling background will take affect. From there Al can smother his opponent until the ref is forced to stop the fight.

I just want to Thank you for asking me to do the interview and allowing me to send a message about Multiple Sclerosis. Again it’s this Sunday, May 6th at Jones Beach Field 5 parking lot. The MS walk will start around 9:30 AM.

One comment on “Vic Torres Jr. talks Al and a Great Cause”