It’s been about a month and a half since his last fight with Myles Jury, but it’s finally time for Al Iaquinta to get back in the cage. He’ll do that tonight when he fights his friend and teammate Andy Ogle in a crucial quarter final fight. Make sure to watch the fight LIVE on FX at 10 PM.(Don’t forget big viewing party and open bar at McCann’s Pub and Grill, Massapequa NY.) The two have talked throughout the week about the challenges of fighting someone who they’ve worked with and become close with over the past few months. “Living in the same room as Andy can be awkward” Iaquinta said, “I’ve been laying in bed all night thinking about ways to beat him up, I’m sure he’s probably doing the same.” Al also went on to touch on the personality of Ogle. “He’s really good at conveying his emotions to people, which is something I’m not really good at. I envy him because of that aspect, I kind of want to beat him up because of it also.”

Both fighters have said they have a good idea of what the other one does, but Iaquinta may have a few extra tricks up his sleeve. “I worked a lot with Andy” Al said, “ I have a good idea of what he can do, I’m sure he knows what I can do as well.” Al followed up by saying “I also have some things he’s never seen that I can pull out in a fight.” Ogle knows just how tough of an opponent Al is. “I predict it will be the fight of the Season” Ogle said. “Al’s expecting a war and I would be a fool to expect anything different.” 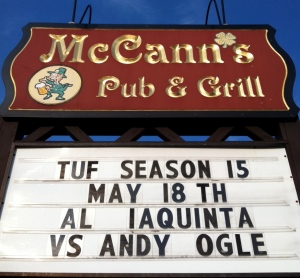 A lot of people are all ready talking abut the Finale for Iaquinta, but even he knows he needs to take it one fight at a time. “Being three fight’s away from the finals is what a lot of people are talking about” Al said, “I’m one fight away from the semi finals, that’s all I’m thinking about. Andy Ogle right in front of me. He’s the toughest fight of my life right now.” The always modest Iaquinta has the right mentality. One fight at a time, one round at a time. Right now it’s all about Andy Ogle.

Now it’s time to put all that aside. Al, and all of Iaquinta Nation needs to forget about the history, the fact that the two are teammates, any past fights, or the opinions of any other fans or “experts” on the Internet. It’s time for Al Iaquinta to do what he does best. Get locked in that cage and out work the guy in front of him. Andy Ogle is a good fighter and from what we can tell a good guy, but once that cage door gets locked all of that gets thrown out the window. Ogle’s going to have to deal with the toughness of Iaquinta who will push the pace of the fight. If Ogle starts to get tired, Al will take it to that next level and push Andy to a place he’s likely never been before. To be honest I don’t think Andy Ogle is ready for the intensity and determination of Iaquinta. Once again it’s fight night Iaquinta Nation. Strap on your seat belts everyone, and let’s go to war.