A look into Iaquinta vs. Pichel 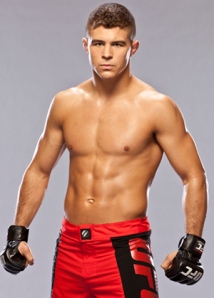 This Friday it will be two big Semi Final fights on the Ultimate Fighter Live. Mike Chiesa will face off against James Vick, and Al Iaquinta taking on Vinc Pichel. Where Chiesa and Vick have had had two weeks to recover, Iaquinta and Pichel will deal with a quick turn around fighting in back to back weeks. “It’s kind of crazy, I’ve never fought week after week like this” Pichel said. “Definitely some pressure keeping my weight down.” What works in Iaquinta’s favor is the fact that his fight last week wasn’t as much of a grind as Pichel’s, and not as much of a toll physically.

Where Iaquinta had a fight where he was in full control, and then knocked Andy Ogle out in the first round, Pichel had a tough back and fourth battle with Chris Saunders that could have easily went to a third round. This was definitely important in keeping Iaquinta fresh. “I’m ready to go, let’s do it.” Iaquinta said about the Semi Finals following his fight. Al would have fought again that night if he had to.

Regardless of how things went last week, it will be Al taking on Pichel this Friday night. Everyone should expect to see a tough battle between these two. It will be interesting to see in which way the fight goes. Both fighters have serious knock out power. Pichel’s seven wins have come by way of knock out, and Iaquinta has had some knock outs of his own, including one of the best of the season last week. The other interesting aspect of the fight will be to see if they remain a stand up war like Al’s last two fights, or will we see some of Al’s wrestling utilized. Pichel showed some great takedown defense when fighting John Cofer who is a phenomenal wrestler.

Whatever the game plan will be Iaquinta will do a great job executing. Earlier in the week he discussed his mental preparation leading up to a fight. “I’ll play the fight over a million times in my head” Iaquinta explained. “Every way I’m winning. I’ll be in the worst positions and somehow I’ll get out of it. If it happens in a fight, I’ve all ready been there in my head. It’s nothing I’m not used to.”

Photo by UFC
“I love being in a fight. Everyone’s excited, everyone’s cheering back and fourth.”

If you want to contrast these two, just like Al’s previous match ups I don’t think Pichel has fought the same quality of opponents that Iaquinta has. Pichel is a tough, strong guy at 155 pounds but I think Iaquinta is extremely well rounded, and will be able to make any necessary adjustments in the fight to beat Pichel. I wasn’t overly impressed with the cardio of Pichel. By the second round of his fight against Chris Saunders he looked tired. As always Al’s endurance will be a big part of the fight, especially if it goes to a third round.

In hearing Pichel talk, it seems like he’s all ready thinking ahead to the finals. More then once he’s commented saying “Once I get past Al” and has even discussed winning that motorcycle in the finals. Iaquinta has done the opposite, all he’s thinking about is the Semi Finals. “In my head right now I’m fighting in the Semis, nothing else. No after or before, just right now. I have a tough guy standing in front of me that I have to beat.”

I believe that Al is going to come out very fired up for this fight. Aside from the obvious reasons, even Al himself said last weeks fight didn’t feel like a fight. “I love being in a fight, everyone’s excited, everyone’s cheering back and fourth.” Iaquinta explained. “”During the fight everyone was quiet, all you could hear was the corners.” Al has discussed that he’s ready to move on and refocus. He’ll do that this Friday when he fights the biggest fight of his life against Vinc Pichel, with a spot in the finals on the line. Don’t miss it, it’s going to be a great one.