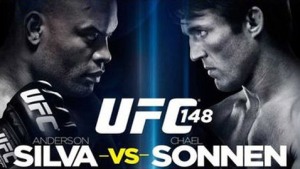 Tonight LIVE on PPV will be UFC 148, a card that many are calling the event of the year, and others are calling the biggest UFC in history. In the main event Anderson Silva will take on Chael Sonnen for the middle weight title. It’s no surprise that these two guys despise each other. Sonnen is the only guy to ever step into the octagon and beat up Anderson Silva. The last time the two fought Sonnen controlled the fight for four and a half rounds and then got caught in a submission late in the fifth round. The fight, if it lives up to all the hype(and I think it will) has the makings of being one of the greatest rematches ever. Both guys, especially Sonnen have done a lot of talking, but now it’s time to stop all the games and for these guys to settle this once and for all. The fight’s going to be a great one. The card will also have the third fight, and “rubber match” between Forest Griffin and Tito Ortiz. The fight will be the final one of Tito’s career. Also Al’s Serra Longo teammate Constantinos Philippou will take on Riki Fukuda LIVE on FX. Make sure you watch and show him some support. Here’s all of Al’s fight predictions for the night.