The Road to Recovery 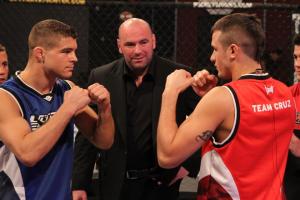 As always I want to thank all of Iaquinta Nation for continuing to check in with the blog. We’ve had a lot of great interviews for you lately as well as fight predictions. Make sure you continue to check in with us as well have some exclusive interviews, videos, work out tips and much more.

As most of you know by now Al Iaquinta is currently sidelined as he recovers from knee surgery. Iaquinta had some torn cartilage under his patella from his semi final fight on TUF Live with Vinc Pichel. Al was forced to have surgery to remove the torn piece. The recovery time is roughly three months, which would allow Al to start training again in October.

One of the most difficult things in the world for an athlete is not being able to do what he or she loves. When you’ve played a certain sport for so long it’s frustrating to have to sit back and watch from the outside. When training and competing is part of your every day life, sitting around and being restricted from doing that can be a true test on one’s patience. I would imagine this is something like what Al is going through now. The battle of playing the waiting game as the body takes it’s time to heal.

There’s that old cliche of everything happens for a reason. The same can be said about Al’s first opportunity to be on the Ultimate Fighter which he was unable to participate in due to a hand injury. Following his recovery, Al had some more time to mature and had some of the toughest fights of his young career leading up to his run on TUF Live. Although it may not seem like it now, and may be frustrating, this will also prove to only be a small bump in the road of a successful career for Iaquinta.

As far as Al goes there isn’t anything to be worried about. His strong work ethic will help him come back from this injury stronger then ever. It will be exciting to watch a determined Iaquinta get back in the gym and prepare for whoever his next opponent may be. Whoever it may be is irrelevant. They’ll be facing a guy in Iaquinta who will be more motivated and driven then ever. Sit tight Iaquinta Nation, Al will be back in the octagon before you know it.