A First Look at Iaquinta vs. Proctor 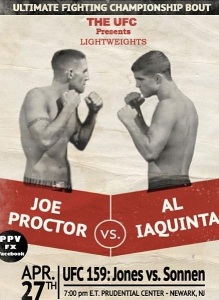 Al Iaquinta is no stranger to fighting in New Jersey, just a few short hours from his home in Long Island New York. He’s fought as an amateur and professional in New Jersey over twenty times. In April, Iaquinta will head back to Jersey once again this time fighting on the UFC 159 Card. Iaquinta is scheduled to fight his former Team Faber teammate Joe Proctor. The fight was first announced here yesterday by Iaquinta himself. An announcement most of Al’s fans and Iaquinta Nation have been waiting to hear for some time. On April 27 a healthy Iaquinta will step back into the octagon, more motivated then ever.

Iaquinta will be fighting for the first time since the TUF Finale on June 1st. Al has been sidelined since having knee surgery in August. Joe Proctor has fought twice since the completion of the show. A knock out win against Jeremy Larsen, followed by a loss to Ramsey Nijem. Iaquinta is excited to get back in their after a long layoff and remind everyone how dominant he was on UFC’s hit reality show.

The event will be headlined by a light heavy weight title fight between Jon Jones and Chael Sonnen, the current coaches of this seasons Ultimate Fighter. Iaquinta join’s a card that will also include Alan Belcher vs. Michael Bisping, Phil Davis vs. Vinny Magalahes, Pat Healy vs. Jim Miller, Cheick Kingo vs. Roy Nelson, and Nick Catone vs. James Head.

The fight will be at The Prudential Center in Newark NJ right in Iaquinta’s backyard. A “home game” as several people are all ready calling it. We would like to get all of you involved. In the next week information will be found here about transportation and a tailgate the day of the fight, sponsored by McCann’s Pub and Grill Massapequa. Check back here for information on tickets as well. If you’re coming to the fight well do our best to try and get everyone seated as close together as possible.

This is a very exciting time for Al as well as all of Iaquinta Nation. You can look forward to tons of videos, pictures, interviews, give away’s, Al’s thought’s on the fight, and constant updates right here as well as IaquintaMMA.com. Come along for what will be a very exciting few months leading up to Iaquinta vs. Proctor.