Iaquinta back to business at UFC 164 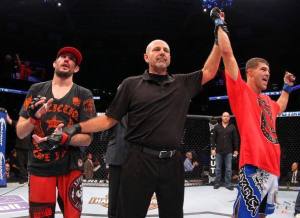 Domination. It’s the perfect word that everyone keeps using to describe “Raging” Al Iaquinta’s performance Saturday night. “I think I’m going to dominate everyone, that just how I think” Iaquinta said. For three rounds Iaquinta did just that, dominating his opponent Ryan Couture. The fight was about as solid of a performance as you could ask for, ending off with a beat up, broken down Ryan Couture and an impressive unanimous decision win for Iaquinta. For Al it’s his first official UFC win, and one that reminded fight fans and everyone in the lightweight division that he’s the fighter to watch out for.

After not fighting for over a year Iaquinta showed no signs of rust Saturday, looking the best he ever has. “I couldn’t be happier” Al said, “This is the best fight of my life right now.” Iaquinta, all ready known to be a dangerous striker threw every punch with authority. UFC announcer Joe Rogan commented on the striking of Iaquinta during the broadcast. “When Al try’s to punch you he’s trying to punch through you.” Couture found that out first hand Saturday. For fifteen minutes he took shot after shot from Iaquinta, each one harder then the next. Al pushed the pace of the entire fight, and was able to keep Couture on his toes the entire time. In the last minutes of the fight Al really turned it on looking to finish Couture who was able to hang in there, but the damage had been done.

Couture was later quoted saying “I feel like he could see everything I was doing from a mile away.” For Couture it was the opposite. He had no answer for the powerful striking of Iaquinta, who kept Couture wondering what was coming next. Couture responded with some decent leg kicks, and a solid knee to the head earlier in the fight, none of which did any significant damage to Iaquinta. Al was able to take Couture down at the end of the first and second round. Some other number’s to note via Newsdays Mark La Monica. Al landed 88 of 196 strikes (43%) but more importantly of the 88 connects 82 of them we’re significant strikes. More impressively Couture was 0-10 on take down attempts against Iaquinta, showing the impressive take down defense Al brings to the table.

Once again a big congratulations to Al for a well fought, smart, impressive performance. Friends, Family, and all of Iaquinta Nation couldn’t be happier for him. It was great to see him back in there and more importantly get a W. This will be the first of many more to come. As for Al it’s back to business. “Back in the gym on Monday, getting ready to go for the next one.”

One comment on “Iaquinta back to business at UFC 164”