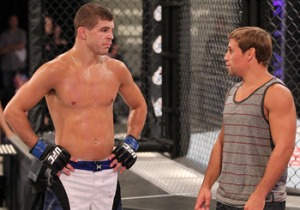 On Febuary 1st Al Iaquinta will once again step back into the octagon for the third time in six months. This time around his opponent will be UFC new comer Kevin Lee. Iaquinta will look to give the undefeated Lee a very unfriendly welcome to the UFC as he looks to make it three wins in a row, his first of the new year.

Iaquinta comes off yet another impressive performance against another undefeated fighter Piotr Hallman. Al traveled all the way to England for the fight and continued the same momentum from his previous fight against Ryan Couture, putting in an impressive performance for a unanimous decision win. Another opponent that was considered to be a tough challenge, resulting in another win for Iaquinta.

For Iaquinta there was no break, or time off. Only a few weeks after the fight he made his way to Sacramento to train with Team Alpha Male, and help Urijah Faber train for his upcoming fight against Michael McDonald. Team Alpha Male has some very talented fighters on their team, making Urijah’s training facility one of the top gyms for a light weight, or any fighter for that matter to train out of. This kept Iaquinta sharp and in great shape in preparation for any fight that may be coming his way.

As it turns out that next fight would be Kevin Lee. Lee is fighting for the first time in UFC but has opened the eyes of several people in the fight business who are now curious what he may be able to do on a higher level of competition. Lee enters the fight with a 6-0 record, winning his last three fights by submission. In his most recent fight he took on another impressive undefeated fighter Travis Gervais and was able to beat him in the first round by submission in The Canadian Fighting Championship. The 21 year old Michigan prospect will have a difficult first challenge in the extremely tough and experienced Iaquinta.

The Febuary 1st fight which will take place at the Prudential Center in NJ, right in Iaquinta’s “backyard” will air live on Fox Sports 1, and will later be headlined by a Bantamweight title fight between Renan Barao and Urijah Faber on PPV. Come down and support Al as he continues to make a name for himself in the lightweight division. The fight is only a few weeks away. Don’t hesitate and be sure to buy tickets today. Looking forward to having Iaquinta Nation at the Prudential Center in full force.