Iaquinta looks to roll on at UFC 183 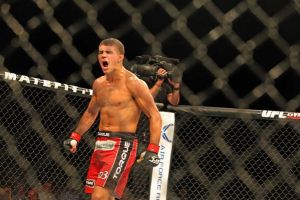 Confidence. It’s one of the most important attributes a fighter can bring into the octagon. The battle can be drawing that fine line between confident and cocky. One of the most important keys to Al Iaquinta’s knock out over Ross Pearson was just that. Confident, but never cocky. The other? This isn’t a fighter who should be taken lightly. He isn’t anyones stepping stone in this division. In his past two fights “Raging” Al has shown he brings knock out power to the table. In less then two weeks he’ll look to bring that same knock out power against Joe Lauzon at UFC 183.

Iaquinta will take on Lauzon live on PPV. The fight will be Superbowl weekend, January 31st at the MGM Grand in Las Vegas. Iaquinta enters the fight winning 5 of his last 6. The Serra Longo fighter has had a busy year capped off by knock out wins over Rodrigo Damm and Ross Pearson. Iaquinta will look to start the year off on the right foot as he takes on submission artist Joe Lauzon. Lauzon has won back to back fights following a bit of a cold streak, dropping 3 of 4. Lauzon is currently the leader in UFC post fight bonuses with 13. Come January 31st it will be Iaquinta looking for a post fight bonus of his own.

The most intriguing aspect of this fight will be the direction each fighter will look to take it. Lauzon will have to be cautious of the strong stand up of Iaquinta. Fight after fight Iaquinta has not only displayed knock out power but smooth additions to his stand up game. On the opposite side Iaquinta will have to be mindful of the dangerous Jiu- Jitsu Lauzon brings to the table. The Boston fighter has 17 wins by submission. It will be interesting to see where the fight goes. Both Iaquinta and Lauzon are intelligent fighters and will respect each other’s game. Lauzon has shown some knock out power of his own with six knock outs in his career. He most recently beat Micheal Chiesa by TKO. Iaquinta brings a strong Jiu- Jitsu game to the table as well training under Matt Serra.

For Iaquinta another great opportunity to continue to make a name for himself in the light weight division. He was able to show in his previous fight against Pearson his ability to rise to the occasion in a big spot. “I fight better when I fight better guys, I fight better when I fight in front of more people” he said after the Pearson fight. He’ll have that same opportunity as the fight will air on PPV and be capped off between the much anticipated main event between Anderson Silva and Nick Diaz. Expect to see a motivated Iaquinta against Joe Lauzon looking to continue to climb the ranks of the light weight division. Sit tight Iaquinta Nation, fight night is right around the corner.