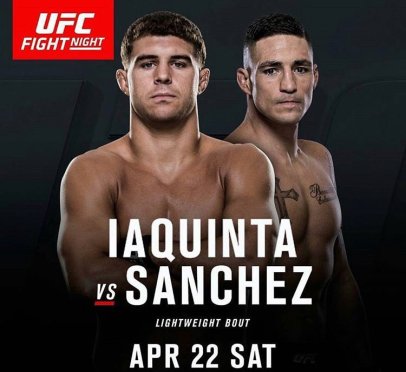 Seven hundred and forty nine days. Thats how long it’s been since Al Iaquinta last stepped inside a cage. In the interim a surgery, physical therapy and recovery, a successful journey into the real estate business, a contract dispute, and eventually “clearing the air” if you will with new UFC management. All roads lead us right here, right to Diego Sanchez. The two will square off this Saturday April 22nd in the Co-Main Event at UFC Fight Night 108.

The always charismatic, TUF Season 1 vet Diego Sanchez (29-9) will put Iaquinta (12-3-1) to the test in his return. Sanchez, who has gained the reputation as a fighter that likes to “go to war”, likes to bang, holds wins over the likes of Clay Guida, Martin Kampman, Takanori Gomi, Ross Pearson, and most recently Marcin Held. The match up is an intriguing one as “Raging” Al has shown to be someone who likes to get into a stand up war with opponents as well. Although that’s what many fight fans expect, they may be surprised to see the fight head in a different direction. “I don’t think it’s going to be that kind of fight,” Iaquinta told MMA Weekly. “I think technically I’m just on another level than him. I trained to be smart this fight.”

Iaquinta comes off the best run of his career thus far with wins over Rodrigo Damn, Ross Pearson, Joe Lauzon, and now Welterweight contender Jorge Masvidal. This will prove to be a difficult match up for Sanchez. “The Nightmare” loves to get into stand up wars but he’ll be fighting a very powerful counter striker in Iaquinta. Normally Sanchez will look to force opponents to stand toe to toe with him. If he sticks with that strategy he’s going to leave the window open for the heavy hitting Iaquinta to capitalize. “Raging” Al’s strong wrestling skills, mixed with top of the line cardio will give him a clear advantage in this fight.

Iaquinta respects Sanchez and won’t be looking past him. It’s been made quite clear Sanchez is a bit “out there”, which is what makes him dangerous. Iaquinta went on to tell MMA Weekly “The guy is absolutely psychotic. He is so out of his mind that it benefits him. You can break guys, but you can’t break that guy, and that’s definitely a dangerous thing.”

Look for Iaquinta to pick Sanchez a part in this fight. To approach the fight technically, intelligently, and look to capitalize on Sanchez’s mistakes. If Iaquinta sticks to the game plan and fights his fight, it will prove to be a tough night for Diego Sanchez. Sit tight Iaquinta Nation, Fight Night is right around the corner.