This week “Raging” Al Iaquinta travels across the border to Canada in preparation for a showdown with Donald “Cowboy” Cerrone. The fight will take place this Saturday May 4th from the Canadian Tire Centre in Ottawa, Ontario, Canada. The bout will be the five round main event on the card, airing live on ESPN+.

Iaquinta (14-4-1 MMA, 9-3 UFC) looks to carry the momentum from his impressive December victory over Kevin Lee into this fight. This will be Iaquinta’s third main event in a row against an opponent in Cowboy who always comes to fight and is never to be taken lightly. Donald Cerrone (35-11 MMA, 22-8 UFC) most recently returned to lightweight for the first time since 2015 recording at TKO win over Alexander Hernandez.

Both Iaquinta and Cowboy have been known for getting in a war or two but that’s the last thing on Iaquinta’s mind. “People are saying this is going to be fight of the night” Iaquinta told ESPN’s Ariel Helwani on his MMA Show. “I just want to go in there and win flawlessly. I want to make it look easy.” He went on “I’m hoping to make him look like he’s on the tail end of his career. Thats the goal.” The 36 year old Cowboy, a veteran in the sport always comes to fight and has proven what a dangerous competitor he is. Yet his gun slinger mind set has also gotten Cerrone into trouble in previous bouts. Expect that he’ll be cautious standing up with Iaquinta respecting his dangerous knock out power. Cowboy could look to test the strong take down defense of Iaquinta in an attempt to take this fight to the ground.

“He’s dangerous, a veteran in the sport” Iaquinta told Helwani. “ If I fight to my capabilities, which I will, it’s going to be a great night for me.” Iaquinta commented on what a huge fight this was as far as exposure. Cowboy is a fan favorite and well known throughout the sport. Where Iaquinta, who’s gained popularity of his own showed how tough and gritty he is during his fight with Khabib Nurmagomedov, this could be the fight that raises his stock to another level. 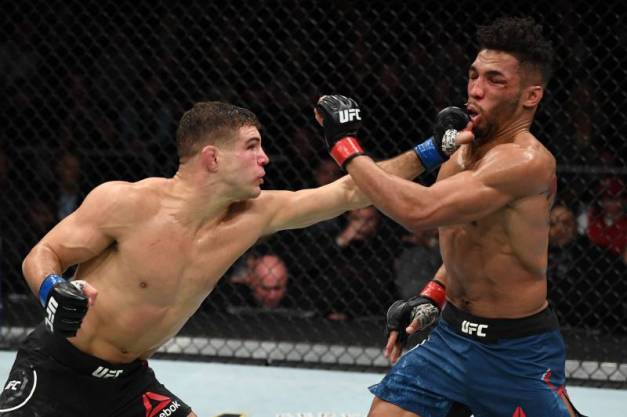 “If I fight to my capabilities, which I will, it’s going to be a great night for me.” -Al Iaquinta

After a tough eight week training camp Iaquinta enters fight week cool, calm, and ready to show why he’s at the top of the Lightweight division. “I’ll break anybody” Iaquinta commented. “There’s very few people that can hang with me in that aspect.” He went on “ I may not be the fastest or the strongest but I’ll always find a way to win.”

One comment on “First Look- Raging Al vs. Cowboy”