While discussing the great training behind Al Iaquinta in the past weeks there’s two names that are always a staple in the conversation. Those names are Ray Longo and Matt Serra. Yet there’s one name that should be thrown in the mix that is equally important and that’s Eric Hyer. Eric is Al’s Muay Thai coach, and has been a critical part of helping Al improve his game over the years.

Hyer started training and fighting with Ray when he was sixteen years old. After several Thai fights he was invited to live at the Fairtex camp in Arizona to work on his game and continue to improve as a fighter. From there he went to Thailand and fought professional Muay Thai for years, many of his fights being in Hong Kong. A unique experience that many fighters dream about having the opportunity to do. At one point Eric held the Muay Thai North American title.

At 31 Hyer moved back home and slowly as he described it got “tricked” by Ray Longo into coaching. Longo made Eric believe he was doing him a favor, where in reality Ray was actually helping him. Now year’s later Hyer feels he was born to coach, and help fighters progress. Ray helped him transition into being a coach slowly, and was an important part of teaching him about how to coach a fighter mentally as well as physically. Hyer has coached in the International Fight League(IFL), as well as coached countless amounts of professional Thai Boxers and Mixed Martial Arts fighters, many in which are in the UFC today. Hyer is extremely passionate about what he does, and is an important part of Iaquinta’s success. Thank you to Eric for taking some time to sit with me and do this interview.

What are your thoughts on Al in regard to his demeanor, toughness, and work ethic?

Al is a hard working, intense kid, and I think that’s because of his strong upbringing. He has a strong foundation and support system behind him, which is really important. I think Al is going to be able to stay grounded and be successful in any area of his life. He’s extremely mentally tough and very mature, especially compared to a lot of guys on the show. Working with him every day you can tell he really enjoys what he’s doing. This opportunity couldn’t have happened to a better kid.

Talk about the progression you’ve seen with Al over the past three years?

They said you should never judge a book by it’s cover, but from day one I truly looked at him and thought he was going to be great. I found out quickly my assumption was right after holding pads for Al for the first time and seeing how talented he was. I was even more impressed by his first sparing session at the gym, where he jumped in there with one of the toughest guys here and held his own against him. Since he started training here he’s progressed by leaps and bounds. Al is very athletic which makes him lot of fun to work with. He’s the kind of guy that you can show something, and he’ll be able to do it and use it right away. There’s no learning processes or days and days of drilling. He’s constantly improving because he’s always making personal challenges. He’s and idea guy, always open to trying new things.

What’s a normal training day like with you and Al?

I love training with Al. He’s so intense and always works hard which makes me even more enthusiastic. We do a lot of pad work together, always trying new things and keeping our training sessions interesting. He’s a pleasure to work with and I feel like he helps me improve as a coach. It’s great to be able to train with someone who is always open to trying out new things and learning new techniques. I’m glad I’ve been able to earn his trust as a coach, and he’s confident in any advice I may be giving him.

How difficult is it for you to watch Al’s fights on TV and not be in his corner, not being able to yell instructions, give advice, etc?

It really is brutal. I’ve known him for awhile now not only on a professional level, but we have a great friendship as well. I love the kid so it’s tough not being right there in his corner on several levels.

What do you think about Al being on Urijah Faber’s team? How much does it play to his advantage having a great wrestler like Faber to work with?

I know Faber and I really wanted Al to be on his team. Urijah is positive, smart, and a good influence. That’s a great guy for Al to be around, a role model that Al could really take after and learn from. With Urijah being a great wrestler I think being on Team Faber was the best case scenario for Al. 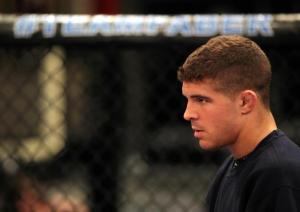 Photo by UFC
"Al is a “downhill fighter”. Even if his opponent thinks he’s doing well, they take one deep breath and he turns it on to another level."

What advice did you give Al about being on reality TV and being constantly followed by TV cameras?

I’ve never been in that situation so I really couldn’t give him any specific advice. I think he’s handling it a lot better then I would. Being away for thirteen weeks is a lot tougher then the normal six. That’s a huge difference but I think he’s staying himself and handling it great.

What were your thoughts on Al’s fight against Myles Jury? Did you think the third round was necessary?

Great fight by Al. The first round was close I think it really could have been scored 10-10. Al really pushed the pace for most of the fight. He had a smart game plan and he executed it very well. I think technically he looked very good even though he was in there with a guy(Myles Jury) that didn’t look like he wanted to fight. It’s difficult executing a game plan when your chasing someone. After the second round I thought it would go to a third. You could tell Jury was dead. He had his hands on his head, and was even leaning on the cage. That six minute commercial break in between rounds definitely helped Jury get some of his wind back. Al still out worked him, Jury wanted no part of him in the final round.

Is there any different instruction you would have given Al if you were there after round one?

He followed the right game plan. Just like he told Urijah the key to the fight was to stay offensive, and I think he did a great job doing that. Myles wanted to win but he didn’t want to fight, didn’t want to go to war. Al wanted to do all those things. I would have just told him to stick to the plan. Jut stay after him and you’ll get him.

How important is Al’s endurance and his relentless ability to continue to attack during a fight help him in a fight like Friday Night?

I’ve always said Al is a “downhill fighter”. Even if his opponent thinks he’s doing well, they take one deep breath and he turns it on to another level. He has incredible conditioning and that’s what gives him the confidence to get to the later rounds. Him being so well rounded is an important part of that ability. It’s very valuable to know who you are and be able to apply it as a fighter. That confidence in his conditioning helps Al stretch a fight and continue to stay aggressive as the fight goes on.

What are the keys to Al being successful from here out?

Al’s locked in now. I think he needs to just keep doing what he’s doing. Working hard and competing every day. If he continues to do that he’s going help himself improve as well as all the people around him on Team Faber. He may even be training a little less then normal which isn’t necessarily a bad thing. Sometimes we have to back him off here because he’s training too hard.

I’ve been trying to put people on the spot for the last question. Al’s in the quarter finals now, do you see him in the finals come June?

I think there’s a great chance you see him in the finals in June. Like I said he’s a downhill guy. Once he starts getting some momentum he turn’s it into a whole new gear. Every positive day Al has increases his chances exponentially.