Although the Middle Weight championship fight between Robert Whittaker and Israel Adesanya has all the makings of a classic, the Co-Main event for UFC 243 has sparked a significant amount of interest of it’s own. “Raging” Al Iaquinta will take on New Zealander Dan “The Hangman” Hooker in front of 60,000 fans at Marvel Stadium in Melbourne Australia. The fight will be LIVE on PPV and ESPN+ this Saturday October 5th at 10PM EST.

Dan Hooker enters the fight with his stock potentially at it’s highest. Although he suffered a TKO loss to Edson Barboza he responded strongly with a knock out win of his own against James Vick. Hooker has shown knock out power but brings a strong submission game to the table as well. His game continues to improve every time he steps in the octagon. Like his opponent Iaquinta both competitors love to fight and always deliver strong performances on fight night. END_OF_DOCUMENT_TOKEN_TO_BE_REPLACED

Iaquinta vs. Hooker Videos to Watch

We’re getting closer to UFC 243 and Iaquinta vs. Hooker! UFC always does a great job covering it’s fighters leading up to fight night. Here’s a few must watch videos to hold you over. Watch Al on UFC 243 Countdown shot right in his backyard on Long Island, as well as the UFC Embedded series. Check back here leading up to the fight for any other pre fight videos. As always thank you for reading and watching. Al appreciates all the support.

It’s been an interesting path leading up to Fight week for Al Iaquinta vs. Dan Hooker at UFC 243. Starting with Hooker calling out Iaquinta after a knockout win over James Vick, followed by speculation if the fight would actually happen. Through some confusion Hooker appeared to be under the impression Iaquinta wasn’t actually interested in the fight. Hooker said via Twitter “UFC told me you turned down the fight. Quit acting like you want to fight me, you don’t.” He went on “If I’m lying the fight would be booked already. Put up or shut up.”

The New Yorker Iaquinta is never one to back down from a fight. “I really don’t think he expected me to say okay” Iaquinta told Matt Serra and Jim Norton on the UFC Unfiltered podcast. Meanwhile Iaquinta had verbally told UFC he wanted the fight creating some disconnect between both sides. Iaquinta went on “Lets go, you want it I’m giving you what you want and I’m going to make you pay for it.” END_OF_DOCUMENT_TOKEN_TO_BE_REPLACED

Ask and you shall receive- Iaquinta Hooker slated for UFC 243 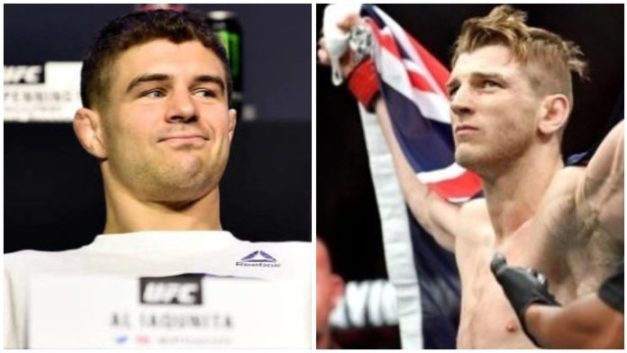 Following his knock out win over James Vick, Dan Hooker let it be known he was looking for a top tier opponent in the lightweight division. “I feel like Al Iaquinta’s the one that makes sense. That name definitely stands out to me.” Through some confusion Hooker appeared to be under the impression Iaquinta wasn’t actually interested in the fight. Hooker said via Twitter “UFC told me you turned down the fight. Quit acting like you want to fight me, you don’t.” He went on “If I’m lying the fight would be booked already. Put up or shut up.” Well, ask and you shall receive. News broke late Sunday night that both fighters had verbally agreed to the bout scheduled for October 5th in Melbourne Australia. END_OF_DOCUMENT_TOKEN_TO_BE_REPLACED 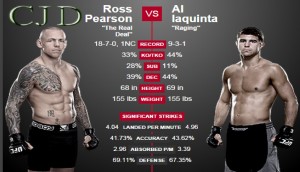 You know what they say, ask and you shall receive. Al Iaquinta has gone on record several times saying that he was ready for a “top name” opponent. He got exactly what he asked for. On Friday night Iaquinta will take on Ross Pearson at UFC Fight Night 55. Pearson is a well known star on the rise who has been making some noise in the light weight division. This Friday it will be Iaquinta looking to make some noise of his own as he looks to defeat Pearson and rise in the division. END_OF_DOCUMENT_TOKEN_TO_BE_REPLACED

There’s one thing that Al Iaquinta is always sure to shout out after a fight and that’s his home town of Wantagh New York. Al pay’s tribute to that town with this brand new Wantagh “Warrior” black and gold Iaquinta Nation T shirt. The shirt comes in all sizes from S-XL and goes for just $30. Similar to the red V necks( still available in stock) they are also an athletic fit.

Fight night Iaquinta vs. Pearson is only a few weeks away. Don’t hesitate and be sure to pick up your new Iaquinta Nation Shirt today. Text, Facebook message, or email me at MattPellicane@gmail.com to place an order.

For those of you wondering when Al Iaquinta would get another fight, wait no longer. Iaquinta will step back into the octagon on November 8th. His opponent? The hard hitting Ross Pearson. The fight will take place at the Allphone Arena in Australia. The entire fight card will stream LIVE on UFC Fight Pass.

Iaquinta and Pearson will be the co main event along side Luke Rockhold and Micheal Bisping. Pearson who appeared on TUF back in 2009, most recently comes off a second round KO of Gray Maynard. He’s unbeaten in four of his last five fights. Iaquinta enters the contest 4-1 in his last 5, most recently knocking out Rodrigo Damm at UFC Fight Night last month. A great match up for Iaquinta against a top ranked opponent. As always be sure to check in here for photos, interviews, shirts, and much more.