He’s back. Following a layoff that last saw Iaquinta in the octagon in October 2019, Al Iaquinta (14-6-1) will return in his own backyard to take on Bobby Green (27-12-1) at UFC 268. The bout will take place November 6th at Madison Square Garden. The two join a stacked card featuring championship bouts between Kamaru Usman and Colby Covington for the welterweight title and Rose Namajunas taking on Zhang Weili for the straw weight championship. After a brief contract delay to finalize all the details the fight is locked in, and so is Raging Al.

END_OF_DOCUMENT_TOKEN_TO_BE_REPLACED

Iaquinta on Sunday match with Perry, potential fight with Poirier

If you thought this Sunday’s grappling match between Al Iaquinta and Mike Perry was going to be a friendly exhibition of sorts, than you are sorely mistaken. The match will take place at Chael Sonnen’s Submission Underground 11 at The Rosalind Theater in Portland Oregon. The event will stream live on UFC Fight Pass.

Both Perry and “Raging” Al appeared on Ariel Helwani’s MMA Show Monday afternoon. While Mike Perry seemed unsure about a lot of the aspects of the bout including weight requirements, attire, and even the specific rules, his opponent in Iaquinta is set to make a statement in Oregon this Sunday.  END_OF_DOCUMENT_TOKEN_TO_BE_REPLACED

Iaquinta to take on Perry at Submission Underground 11 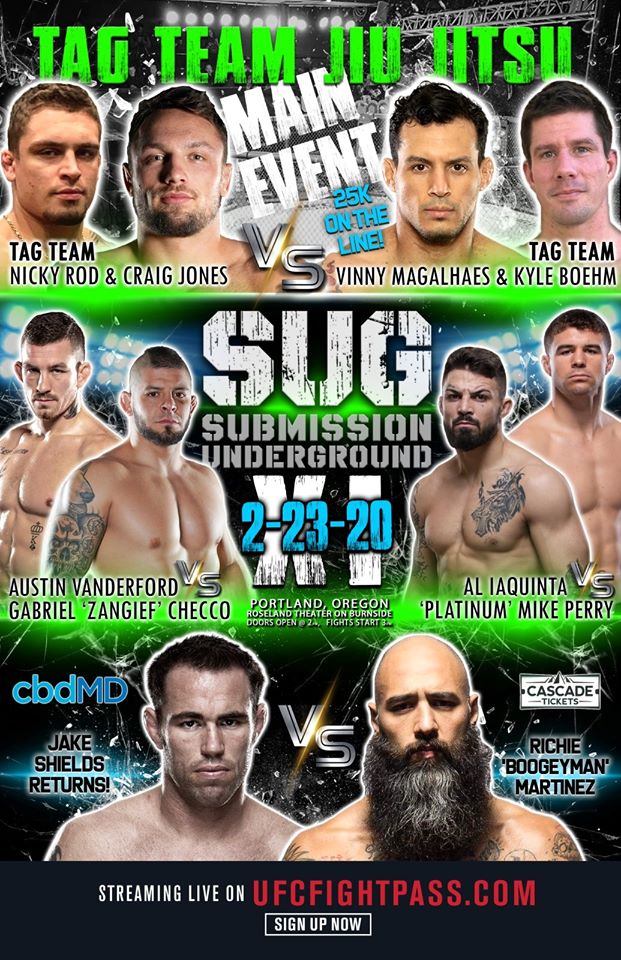 “Raging” Al Iaquinta will take on “Platinum” Mike Perry but not in the setting you may be expecting. Iaquinta will meet Perry in a grappling contest at Chael Sonnen’s Submission Underground. The match will take place February 23rd at the Roseland Theater in Sonnen’s hometown of Portland Oregon. Sonnen held several of these events from July 2016 to April 2018. This will be the first event since that April. Submission Underground (SUG) is a submission only format with the rules being similar to those familiar with Eddie Bravo’s “Eddie Bravo Invitational. The organization has raised a significant amount of interest with grappling and MMA fans and competitors. SUG 11 will be headlined by a Tag Team match between Nick Rodriguez and Craig Jones taking on Vinny Magalhaes and Kyle Boehm. END_OF_DOCUMENT_TOKEN_TO_BE_REPLACED

Once again Iaquinta Nation it’s Fight Night. The UFC 243 Co-Main Event is one that has fans from Long Island New York to Melbourne Australia excited. “Raging” Al Iaquinta will take on Dan “The Hangman” Hooker in a dynamic lightweight bout. Both fighters have something to prove, looking to do so in front of what will be crowd of almost 60,000 at Marvel Stadium in Melbourne. Dan Hooker will look to build momentum following a knockout win over James Vick, as well as send a big statement in attempting to score a win over Iaquinta. An important matchup for Iaquinta as well as he looks to bounce back following a loss to Donald Cerrone, putting himself back in the Lightweight Title conversation. END_OF_DOCUMENT_TOKEN_TO_BE_REPLACED

It’s been an interesting path leading up to Fight week for Al Iaquinta vs. Dan Hooker at UFC 243. Starting with Hooker calling out Iaquinta after a knockout win over James Vick, followed by speculation if the fight would actually happen. Through some confusion Hooker appeared to be under the impression Iaquinta wasn’t actually interested in the fight. Hooker said via Twitter “UFC told me you turned down the fight. Quit acting like you want to fight me, you don’t.” He went on “If I’m lying the fight would be booked already. Put up or shut up.”

The New Yorker Iaquinta is never one to back down from a fight. “I really don’t think he expected me to say okay” Iaquinta told Matt Serra and Jim Norton on the UFC Unfiltered podcast. Meanwhile Iaquinta had verbally told UFC he wanted the fight creating some disconnect between both sides. Iaquinta went on “Lets go, you want it I’m giving you what you want and I’m going to make you pay for it.” END_OF_DOCUMENT_TOKEN_TO_BE_REPLACED

Once again Iaquinta Nation it’s fight night, and an exciting one at that. In tonight’s UFC Fight Night main event it will be “Raging” Al Iaquinta taking on Donald “Cowboy” Cerrone. Where both have expressed a mutual respect for one another it will be all business when the cage doors lock. Both fighters know just how important this bout is in regards to another shot at lightweight gold.

It’s two very intriguing paths that Iaquinta and Cerrone are currently on. Cerrone the well known gritty veteran. A competitor that all fight fans know, respect, and enjoy watching. The UFC’s all time win leader holding victories over some of Mixed Martial Art’s best. He’s fought on short notice, in two different weight classes, won several post fight bonuses, and fought for a title multiple times. Yet the knock on Cowboy has always been his inability to come through in the “big fight”. With all that in the past, THIS is now that next big fight. If Cowboy wants another opportunity to fight for a title it starts with the tough New Yorker Iaquinta. END_OF_DOCUMENT_TOKEN_TO_BE_REPLACED

With both Lightweights weighed in tomorrow nights main event is officially set. Ottawa, Ontario is fixed to see a great one as #4 ranked Al Iaquinta will take on #8 Donald Cerrone in a main event with a potential championship opportunity in the balance. With champion Khabib Nurmagomedov suspended, Dustin Poirier holding an interim title, and other top ranked competitors Tony Ferguson and Connor McGregor’s futures both in question, a lot of eyes will be on tomorrow nights match up with Iaquinta and Cerrone as potential suitors for another title shot. With that being said Iaquinta nor Cowboy are ones to look past the opponent in front of them in what has the makings to be a classic. END_OF_DOCUMENT_TOKEN_TO_BE_REPLACED 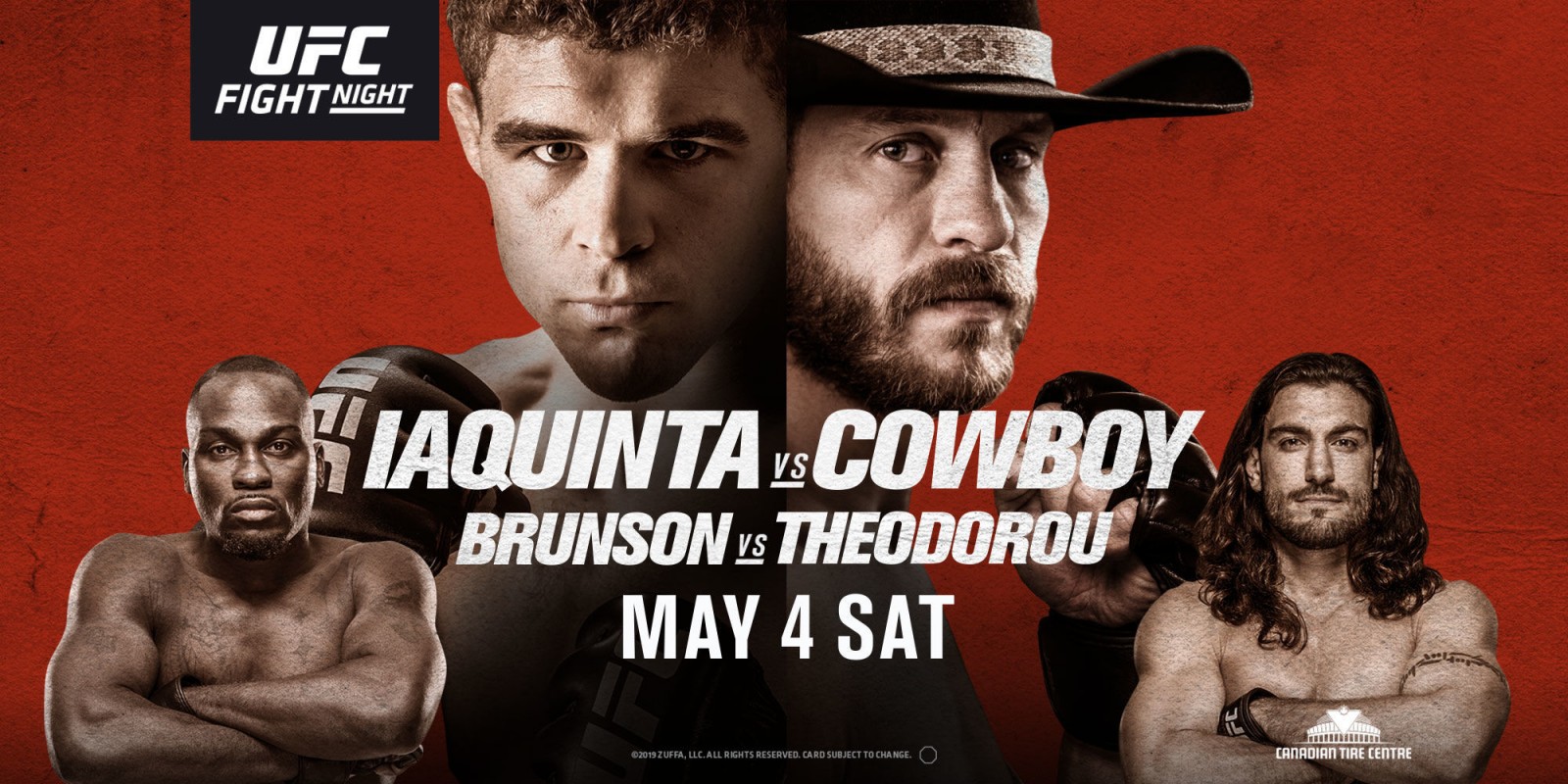 This week “Raging” Al Iaquinta travels across the border to Canada in preparation for a showdown with Donald “Cowboy” Cerrone. The fight will take place this Saturday May 4th from the Canadian Tire Centre in Ottawa, Ontario, Canada. The bout will be the five round main event on the card, airing live on ESPN+.

Iaquinta (14-4-1 MMA, 9-3 UFC) looks to carry the momentum from his impressive December victory over Kevin Lee into this fight. This will be Iaquinta’s third main event in a row against an opponent in Cowboy who always comes to fight and is never to be taken lightly. Donald Cerrone (35-11 MMA, 22-8 UFC) most recently returned to lightweight for the first time since 2015 recording at TKO win over Alexander Hernandez.  END_OF_DOCUMENT_TOKEN_TO_BE_REPLACED

Yesterday on Ariel Helwani’s MMA Show Al Iaquinta said he had been assured by UFC his next fight would be a “big one”. Twenty four hours later it would appear that to be true. News broke Tuesday afternoon that Iaquinta (14-4-1 MMA, 9-3 UFC) had agreed to fight Donald Cerrone (35-11 MMA, 22-8 UFC). The fight will take place May 4th at the Canadian Tire Centre in Ottawa, Ontario, Canada. The fight will be live on ESPN +. Both sides have verbally agreed to what would be the main event on the card.

“Raging” Al Iaquinta comes off a strong five round unanimous decision win over Kevin Lee, which moved him further up the lightweight rankings. Most recently, Donald “Cowboy” Cerrone returned to lightweight for the first time since 2015 recording at TKO win over Alexander Hernandez.

It’s no secret the lightweight division has several question marks centered around the suspensions of Champion Khabib Nurmagomedov as well as former champion Connor McGregor. Both Iaquinta and Cerrone had lobbied for a matchup with Connor McGregor. Yet with a potential fight between McGregor and Cerrone, as well as a fight between Iaquinta and Tony Ferguson both falling apart it would leave the “Brooklyn Gangster” Iaquinta to take on “Cowboy” Cerrone.

The fight has the makings to be an exciting one. Cowboy currently ranked #9 recently said he wanted someone in the top 5 of the division. He gets just that in Iaquinta currently ranked #4. For Iaquinta an opportunity to record a win over a big name and veteran in the sport as both fighters look to continue to climb the ranks, working towards UFC gold.

When the rankings came out on Tuesday The UFC lightweight division would see a few changes. Iaquinta moves to 4th, breaking into the Top 5 for the first time in his career. Raging Al recorded a unanimous decision win over Kevin Lee Saturday night, now winning six of his last seven. The win would jump Iaquinta in the rankings from 8th to 4th. Outside of the move in the rankings the hard fought win over Lee continued to open up eyes in the mixed martial arts world. The misconception of real estate agent/part time fighter has faded away. Not only has the narrative changed but it’s Iaquinta who’s in the conversation to potentially challenge for the lightweight belt once again. END_OF_DOCUMENT_TOKEN_TO_BE_REPLACED